Federal Pacific Stab-lok Electrical Panels – Why you should care, how to tell if you have one, and what to do about it

Federal Pacific Stab-lok Electrical Panels – Why you should care, how to tell if you have one, and what to do about it 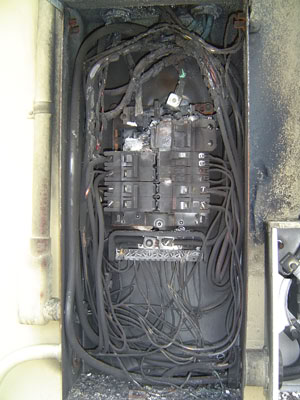 Each circuit in an electrical service panel must be protected by a circuit breaker. Circuit breakers protect electrical circuits by interrupting the flow of current whenever a fault condition, such as an overload or short circuit, is detected. This is known as “tripping”. Electricity generates heat as it flows through wiring. Without the circuit breaker present to interrupt the flow of current, the overloaded circuit would generate excessive heat. This excessive heat is capable of melting the wiring and igniting nearby materials, creating a significant risk of an electrical fire.

In most cases, the service panel and associated circuit breakers in your home will be safe, and designed to handle your home’s electrical capacity. However, in many cases, particularly in homes built prior to 1990, you may have a Federal Pacific Stab-lok panel and breakers, which has been shown to be defective and to pose a serious hazard to your home and family.

Federal Pacific was one of the largest manufacturers of circuit breaker panels in North America from the 1950s through the 1980s. Their panels and breakers were commonly installed in homes in the United States during this time period. It was only later discovered that Federal Pacific Electric panels and breakers often failed to provide the necessary protection to the home’s electrical system. Millions of defective, substandard circuit breakers were distributed throughout the years. These circuit breakers fail to trip at a rate much higher than circuit breakers from other manufacturers. Often, this problem will not become apparent for many years; one overload or other fault condition will usually reveal the problem, and by then it’s too late. As a result, it has been estimated that this faulty equipment is responsible for over 2,000 electrical fires nationwide, each year.

It is clearly important that you identify whether or not you have one of these defective panels and associated breakers, whether you are thinking about purchasing an older home or, especially, if you live in an older home and are uncertain about your home’s electrical equipment. The following YouTube video gives a good, brief overview on how to identify these panels.

If you are still uncertain whether or not your panel poses a significant risk, regardless of manufacturer, Spectrum Electric will be happy to inspect it for you.