Electrician Blog - Advice and Tips from a Licensed Electrician 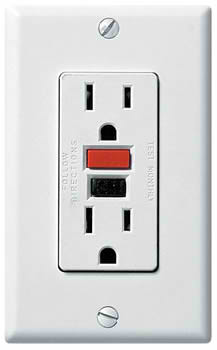 Ground faults are a dangerous condition that occurs when electricity develops an unintended path to a grounded surface. Properly functioning electrical systems follow an intended low-resistance grounding path. When there is a break in this grounding path, one’s body can become the grounding path, causing severe or fatal electric shocks. GFCIs are designed to mitigate the risk of this electrical danger.

Touching a live electrical wire is never a good idea and can easily be avoided but, in the second example we illustrated, you might have no way of knowing that the washing machine was electrically charged due to a ground fault. That’s where a ground fault circuit interrupter (GFCI) comes into play. If our washing machine were connected to a GFCI, the ground fault would be detected by the GFCI and the power would be interrupted before a shock could occur. The GFCI handles this by continuously monitoring the current flow through a circuit. If it detects that more current is flowing to the device than from it, it knows that a ground fault has occurred and power is interrupted.

The Electrical Safety Foundation International (ESFI) has recently estimated that the number of home electrocutions has halved by the recent increase in GFCI installations. Due to their increased safety and ability to prevent dangerous electrical shocks, GFCIs are required by the National Electric Code in all new kitchens, bathrooms, crawl spaces and most outdoor receptacles. Owners of older houses have a number of options for retrofitting their electrical outlets, which you should discuss with your licensed electrician. We will be happy to be the electrician in Orlando to answer any and all questions you may have.

It’s simple to identify GFCI outlets in your home. Just examine your outlets, ensure that they have three prongs and a “test” and “reset” button in the center (the picture associated with our article also represents a typical GFCI outlet). If you do have GFCI outlets, it’s a very good idea to test them on at least a monthly basis. To do this, simply plug in a portable lamp to each GFCI outlet, make sure the lamp is turned on and press the “test” button. If the lamp does not immediately turn off, indicating the GFCI has done its job in interrupting the power flow, the GFCI should be replaced.

In summary, we hope this article has been informative and shown the importance of GFCIs and demonstrated the dangerous nature of electricity and the precautions that should be taken in its use.